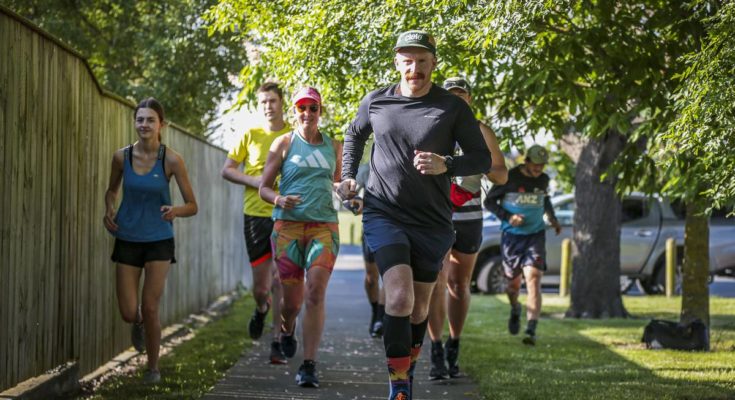 Police detective Dom Brown is pushing to turn a tragic statistic into a milestone.

Affectionately dubbed the “Flying Ginger”, the coppertop cop is running 11.6 kilometers every day in November to raise money for the local youth suicide education initiative, the Reid O’Leary Charitable Trust.

talking to Hawke’s Bay Today it’s clear he’s fond of his new running name, but reckon it’s a tad flattering. “Obviously the ginger bit is accurate, but I’m not sure about the ‘flying’ part, that’s a bit generous.”

Candid video updates on Instagram (including one from the bathtub) and the blazing-red mustache illuminating his path on morning runs have sparked a wide following and support base.

Ginga-groupies hoping to join him have been told it’s an “easy pace”, but have been warned “the most punishing thing” will be his “terrible banter.”

The daily jogging distance was drawn from the chilling figure of 11.6 people out of 100,000 of the country’s population who lost their battles with mental illnesses in 2021.

“I’m a big advocate of mental health after a few struggles of my own, as many people have, so I wanted to do something.”

He said the trust, which formed after the suicide of 21-year-old Hastings mechanic Reid O’Leary in 2020, was a good fit with what he was doing.

“Essentially I think it suited me because it’s a great local initiative and isn’t just one of the big organisations.”

With 11 years in policing, Brown now works in the police Child Protection Team.

“Front line police are going to mental health situations all the time and, sadly, the deaths. It’s a really big issue in Hawke’s Bay and it simply doesn’t discriminate.

“I’ve learned that mental illness is a super power. If you can make it through the worst of times, if you can wade through the judgement, the darkness, the exhaustion, then you can do whatever you want.”

Early on, he was frank about his fitness. “It’s going to hurt; so does mental illness. The runs are getting easier though, I just need to keep on top of rest time and diet”.

He’s stoked by the support, including Tumu which is donating $2 for each kilometer he runs.

“It’s a privilege to do this and be surrounded by such good humans. I’m pumped for more.”

* The public can join Brown during his run at Flaxmere Park, starting on Henderson Rd opposite Flaxmere College, on Monday November 21 6am-8am. For more information check out his Instagram account the_flying_ginger_hb

* Tickets are still available for the Rock the Bay concert this Saturday at Black Barn, which includes Devilskin, The Feelers and Capital Theatre. All funds raised go to the Reid O’Leary Charitable Trust’s local youth suicide initiatives. Tickets at rockthebay.flicket.co.nz.