hen Kamal Miller joined Vaughan SC as a teenager, he was strong and aggressive with phenomenal ball skills for a center back. But he was also raw, and had a softer body type. He barely drank water or knew about nutrition, his club coaches said.

“He didn’t look like an athlete,” said Jordan Feliciano, one of his Vaughan coaches. “He was shorter, stockier, and for a center back, those are the two worst character traits.”

But Patrice Gheisar, his other club coach, put it differently.

“If you didn’t know him, and me and you are walking the dog and we stop by a soccer field to watch a game, when he was in grade 11 we would say ‘damn, that kid can play’” Gheisar said. “But he had a little bit too much of a love affair with the ball, and he was a bit out of shape.”

After landing at Syracuse, Miller continually improved his fitness and diet. He started every game but three in four years with the Orange. Now at MLS club CF Montreal, Miller started in the 2022 MLS All-Star game and is projected to start in Canada’s backline in the World Cup next week. Miller and former Syracuse teammate, Tajon Buchanan, who both play for Canada, are the first Syracuse players to reach a World Cup.

“Just the other day, we were in the locker room together, walking out to the training field,” former teammate John-Austin Ricks said. “And now, I see them in Qatar for the World Cup.”

Buchanan left school early after signing a Generation Adidas contract, was picked in the top 10 of the MLS SuperDraft and signed a European deal.

But Miller stayed all four years at Syracuse, didn’t land in the first round of the MLS SuperDraft and wasn’t even protected by his club in the 2020 MLS Expansion Draft. His road to the World Cup was driven by continual fitness improvements, which started at Syracuse and are now at “unimaginable” levels, said Adnan Bakalovic, his former teammate.

Feliciano and Gheisar both said Miller’s physical tools got him far, but once he started playing above his age group, his lack of fitness held him back from his true potential. 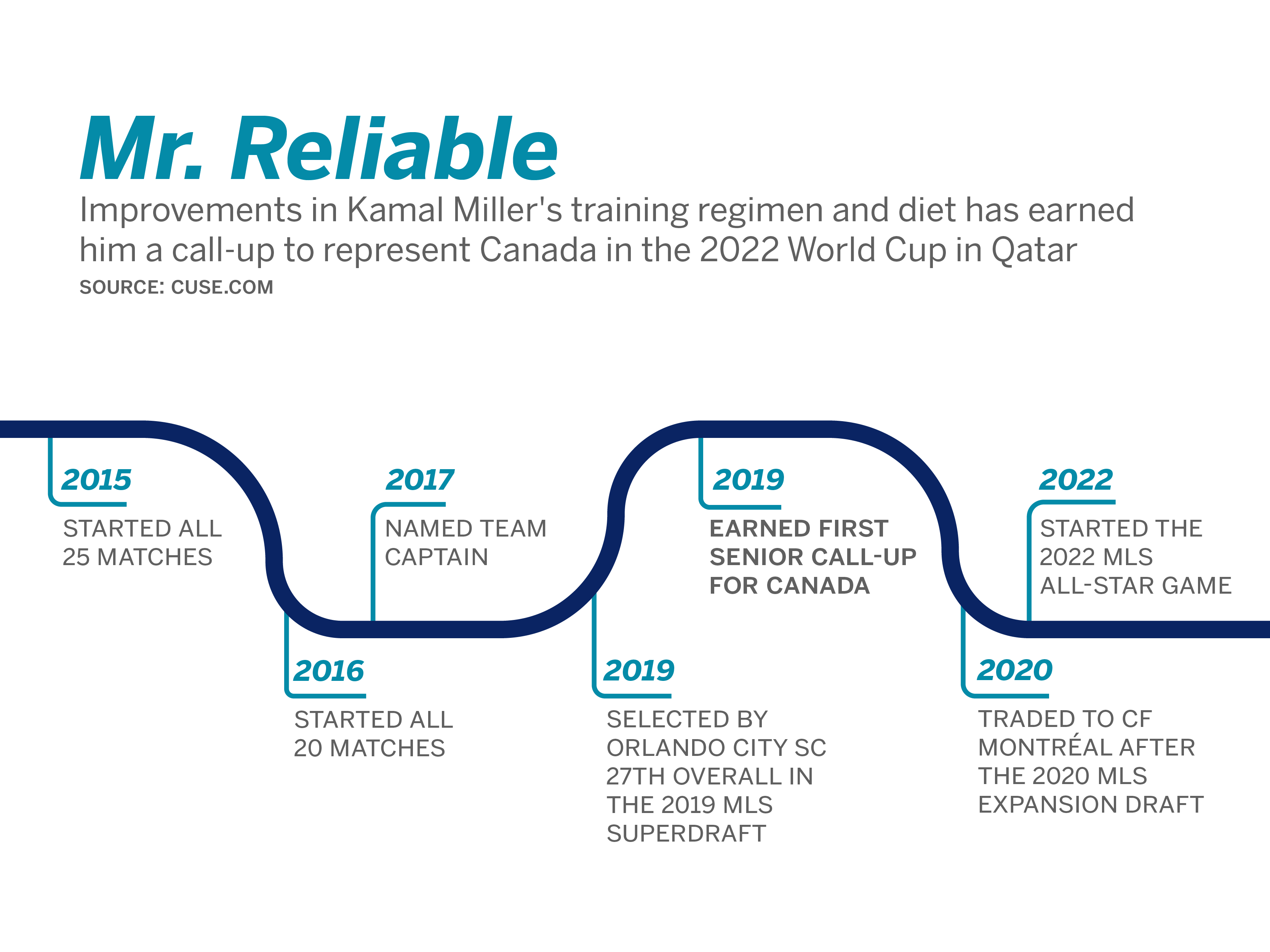 During his junior year of high school, SU head coach Ian McIntyre visited him frequently during the showcasing period in November, December and January. Miller worked on his fitness and his schoolwork to make sure he was academically eligible for his “dream school.” According to Gheisar, he attended night school to bring his average from the 55-60 range to the 85-90 range.

Miller started immediately for Syracuse, but Gheisar remembers him cramping up in his second career game against Bucknell. Previously, he couldn’t execute an effective nutrition plan, but McIntyre provided support, Gheisar said. At Vaughan, it wasn’t a big deal if he was late to a training session because he had a long drive with traffic that could slow him down. But at Syracuse, he quickly learned the importance of sticking to a schedule, Gheisar said.

Miller improved tremendously in his freshman year, several teammates and his club coaches said. McIntyre repeatedly got on Miller about holding the ball too long in a match against BC during his freshman year, Bakalovic said. But Miller worked on his one-touch and two-touch passing skills, and Ricks said he’s now one of the best center backs in the game at controlling the ball.

Vaughan built play almost entirely through the back, which meant Miller was almost exclusively playing short passes instead of long ones. But when Vaughan scrimmaged Syracuse in the spring of Miller’s freshman year, Feliciano was in awe of Miller’s new skills. Miller boomed a 60-yard diagonal ball to switch the play, something he had never done at Vaughan.

Miller worked out twice a day all year, but teammates and coaches both said that his offseason work set him apart from others. He practiced with Vaughan over Christmas break in addition to playing in other tournaments with his friends. When he returned to Vaughan after Syracuse’s 2016 College Cup run, Feliciano said Miller’s increased dedication to fitness and diet was obvious.

Miller spent his last two collegiate summers in Syracuse, working with strength coach Cory Parker and a revolving group of about five teammates. Jake Leahy, who lived with Miller both summers, said their daily routine consisted of waking up and going to the gym with Parker, followed by a nap and an afternoon practice.

His improved fitness allowed him to do even more with the ball and maximize his natural abilities, Bakalovic said. He progressed with the ball better and even played outside back, which required much more running up and down the pitch.

Ahead of the MLS SuperDraft his senior year, Miller worked even more on his fitness, Leahy and Ricks said. Miller went to Manley and ran the stairs as well as the hurdles to improve his pace.

Miller slides into the second round of the MLS SuperDraft, where he was picked 29th by Orlando City SC. He began spending more time than ever on his fitness and diet. He started cooking for himself and even filmed a video during quarantine, called Cooking with K Millz, about making a day’s breakfast of a smoothie, omelet, and pancakes.

But at Orlando City, he faced a steep learning curve to adjust to Colombian head coach Óscar Pareja’s South American style of play. Pareja limited Miller’s potential, Ricks said. Miller was left unprotected in the 2020 MLS Expansion Draft and was selected by Austin FC before being immediately traded to CF Montreal. At CF Montreal, he plays on the left side of a back three, just as he did at Syracuse.

Miller also faced obstacles trying to move up in the national team ranks. Gheisar had to practically beg Canada U20 head coach Rob Gale to give Miller a chance. Most of the players on the team went the traditional route of playing for a club team’s reserve side. Miller was looked down on because he played college soccer instead.

But his MLS performances made him hard to ignore. Since debuting for the national team in 2019, he has grown into a dependable starting center back. Both Gheisar and Feliciano said European clubs will be watching his World Cup performance.

“His biggest issue probably back then was just his fitness,” Bakalovic said. “You look at him now, and that’s not the case anymore, it’s probably one of his biggest strengths.”