London was the host of the second England Athletics Regional Volunteer Awards for 2022. Hosted at the London City Runners, uniquely a Brewery, bar and cafe, it brought together volunteers from across the region.

Mornington Chasers Running Club is a very low-priced, friendly volunteer-led London running club. The member ‘experience’ places equal emphasis on social connectivity, community and friendship as on athleticism, running and racing. The club have pledged to follow She Races guidance to support female members. Club coaches collaborated to make weekly track speed sessions more inclusive; beginners now attend track from week 1, which has had an epic impact on new member inclusion, retention and creating bonds between members who wouldn’t typically speed-train together. The club’s unique online ‘Chasebook’ provides customizable schedules that allow all abilities to train together and learn from the same training plan.

Club of the year – runner up: Kent AC

Feedback at Kent AC indicated that getting off to a good start was essential to how potential members settle into club activities. Within 24 hours of joining, a new member receives a welcome and useful information pack from the Welcome Coordinator. Volunteers at the track entrance on club nights can assist the new member. There is dedicated training group for parents of junior members – parents can exercise whilst the youngsters are training. Road, track & field, cross country and vets captains celebrate successes in the club and create a team atmosphere at our key fixtures and league events. The monthly club parkrun and coffee successfully brings together members from different groups on a Saturday morning. Tuesday night summer socials – offering food and drinks after training – provide a way for athletes to meet others in different training groups. 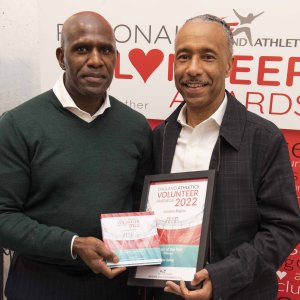 Jay Galley inspires his athletes by creating an environment in which they train effectively and develop their abilities. His training regime is meticulously planned and tailored to individual needs. He establishes the right balance between enjoyment and hard work and his playlists are the envy of other groups! He supports them all during difficulties and provides continued encouragement; it’s always about their long-term success and not short-term. He is developing his coaching assistant’s knowledge so that she can take the level 2 qualification. He attended as many of the practical and online sessions of the Youth Talent Program with his 3 athletes. He also puts together successful teams for the London Youth Games which involves contacting schools to include non-club athletes, and running selection trials, then managing teams on the day.

Coach of the year – runner up: Kevin Best

A coach to all abilities of runners at The Stragglers Running Club, Kevin Best dedicates the same energy and enthusiasm to a 45 minute 5k runner as a 15 minute one. All 7 of his Tuesday session targeting Manchester marathon were rewarded with sub 3 hour times. He ensured real team spirit with ‘pod’ races during lockdown, a distance based leaderboard to motivate the more competitive runners, and social run and strength sessions for all abilities. He also provides books, strength videos and other literature to help athletes take a holistic approach to training. With the return of cross country, he attended every fixture – from offering to arrange childcare to changing those tough mud-covered spikes, Kevin supports the team far beyond his role of coach.

Rachel Kerr is always ready to officiate at all levels – as well as being an ever present at home fixtures. She was thrilled to be accepted to officiate at the Commonwealth Games She was instrumental in engaging the support of local Level 4 officials as part of her volunteering upskill day attended by 25+ officials and volunteers, followed by Level 1 Field Officials’ course later in the year. The Essex AA Committee have agreed to adopt this successful training model and to support an event for Essex officials and volunteers in early 2023. Rachel has an infectious enthusiasm to Inspiring others, and her spirit for the sport certainly rubs off. Her experience and professionalism are beyond her young age, and she manages to put both athletes and fellow volunteers at ease. Rachel works full time as a teacher, is a qualified coach and competing athlete, but always has time to support others.

After a start in field officiating in 2019 and a COVID enforced break, Stuart Pugh took the level 1 track judging and endurance officials’ courses in 2021, progressing to level 2 by the end of the season. This year he submitted his application for Level 3. He is always well prepared and pays careful attention to detail, even if he is not the track referee. He explains things clearly, so even the newest officials know what they are doing. At the local Young Athletes League, His duty sheets always ensure that trainees are buddied up with people to support them. Stuart is a great advocate of officiating; he has taken on the role of officials’ secretary for his club and has actively recruited new officials. 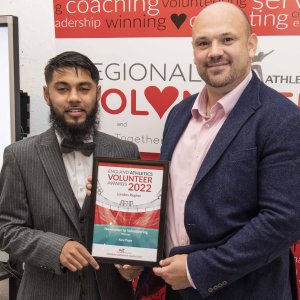 Previously, Blackheath & Bromley Harriers AC linked on multi-athlete events having multiple coaches and this brought its own set of challenges. Alex Pope’s background as a multi-event athlete and a schoolteacher provides him with the perfect skill set for this group. Alex is diligent, caring, attentive, enthusiastic and knowledgeable about the events he coaches. He also volunteered for Kent County AA this year as team manager. He has shown unwavering commitment to his athletes and can be found on the track most evenings and weekends doing multiple sessions with hurdles, long-jump, high jump, discus and shot put, as well as running events. Alex is often at the track doing his own training and this visibility to all the athletes inspires them. 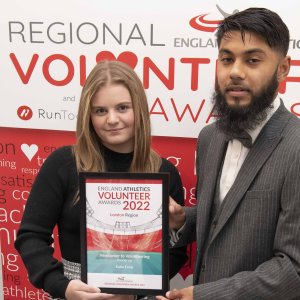 Katie Ennis started volunteering 2021 with the online field officials’ course. She also supports coaching younger athletes on Havering AC club nights, in a way that is easy for other athletes to understand and will spend time explaining, demonstrating and encouraging them. This year she officiated at 16 different events, competed in 21 competitions and volunteered at 63 parkruns. Katie actively looks to develop her skills and attended an upskill day for officials where she delved more into the Technical Manager and Clerk of course roles. She represented Essex as their young official at the English Schools’ Championships. Katie undertakes every task with enthusiasm and a smile, can build a rapport with athletes and volunteers and is quick to resolve any potential conflicts in an empathic fashion, whilst maintaining her integrity and sense of fairness.

Without him, Havering AC would not function anywhere near as efficiently as it does. Tony Benton’s commitment is absolutely unquestionable. On taking over as Club Chairman in 2016 he steered the direction of the club, setting high expectations with the active support of the Club Committee. In his role of club Secretary he supports the new Club Chair, sharing his knowledge and expertise from his 50+ years in athletics.

He is visible at club training sessions as a performance coach and attends most club fixtures as an official or as a team manager. In addition his roles at the club include website manager, press officer, officials’ secretary, home meetings organizer and records and statistics officer as well as leading on policy development, and project managing facility improvement to gain TrackMark status for Hornchurch Stadium.

Club Leader of the year – runner up: Paul Byfield

Paul Byfield is a pivotal member of the Blackheath & Bromley Harriers AC committee and runs the Active Athletics sub-committee, the disciplinary committee, and leads a diversity and Inclusion sub-committee to fulfill the Club’s goal of becoming accessible to all. He manages new athlete inquiries and has put in place a 6-week introductory scheme allowing potential new members to try out different events. He co-ordinates the Team Managers and Club Coaches and the organization of club matches, plus a successful pre-season weekend trip to Jersey for the junior athletes to compete against the Channel Islands teams this year. As a Past President, Vice-President and parent, Paul’s knowledge and experience are invaluable.

Tooting Run Club was launched in March by Herne Hill Harriers to increase activity levels within the community. Project leader Tahir Shams was a run leader at RunTalkRun, and is supported by Keith Newton, Andrew Black and Glen Keegan who have a background in competitive athletics and club coaching. The run coaching is provided by Herne Hill Harriers coaches with assistants from the membership and Wimbledon Windmilers coaches. A number of club runners – especially women – have taken the first steps on their coaching journeys. 160 people every week sign up, and have made new friends and increased social network, as well as enjoying the benefits of improved fitness, well being and mental health.

Community Project of the year – runner up: The Outrunners

This Charity provides opportunities for young people of Hackney to thrive by using the experience, skills, and time of the volunteer running crew. They help build young people’s confidence and skills through many activities in the local area, including our youth running club. CEO of The Outrunners Tyler Williams-Green joined the charity as a volunteer running coach in January 2020 because of his love of working with young people and running. Tyler wants every child to flourish, grow and have high aspirations and he is doing that right now. The impact The Outrunners has had for the young people is incredible. Young people are blossoming with confidence and raising their aspirations to be the best version of themselves.

New Eltham Joggers NEJ Running Club President Joe Cleverly attributes his early love of running to his grandfather Joe Deakin a gold medallist at the 1908 Olympics. In 2012, his 80th Birthday year; he was nominated for, chosen and successfully completed a leg of the Olympic Torch Relay. He still runs in events when not organizing and supporting others! He has always been competitive as evidenced by his successes but has never lost an inherent ability to encourage, foster and inspire others, no matter what their ability He reaches out other local Club runners in the organizing of a monthly 5k handicap run. He also stays to the very end of an event to ensure that all our runners are clapped in and safely home. Joe inspires people not only for his longevity but as life gets tougher for him with age, he just gets on with things and is even determined to continue to inspire others.

Trevor Wells has been involved in athletics since 1970 as an athlete where he acquired a number of honors up to the 1976 Olympics. Following his retirement, he began coaching in the 1980s and has dedicated numerous hours to nurture future talent and pass on his expertise to athletes and parents. He has a dedication to, knowledge of, and expertise in athletics which distinguish him within the sport. He goes above and beyond what is expected of him to support others in an approachable and friendly manner. An advocate of good mental health, he works with all athletes with other issues they may be facing outside of athletics. Currently a member of Havering AC, he is a committee member and Equipment Officer, and past Club President. Overall, Trevor is a great communicator, dedicated mentor, and all-round team player and regularly commits several hours a week to Havering AC.

Not only an Ever Present at the London Marathon but also an Ever Present at Queen’s Park Harriers since the 1980s. Bill O’Connor’s volunteering roles have covered everything from Cross Country Captain, Treasurer, to QPH Middlesex Representative. He carried the Olympic torch in 2012 and is now president of Middlesex County AA and the Chiltern League Cross Country. As the grandfather of the club, his encouragement to all members is inspiring and humbling. He includes himself in his belief that everyone should have a go and is himself a determined Master athlete. Bill has guided and encouraged members to become coaches, allowing Queen’s Park Harriers to grow. 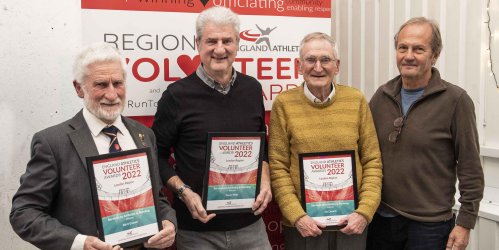