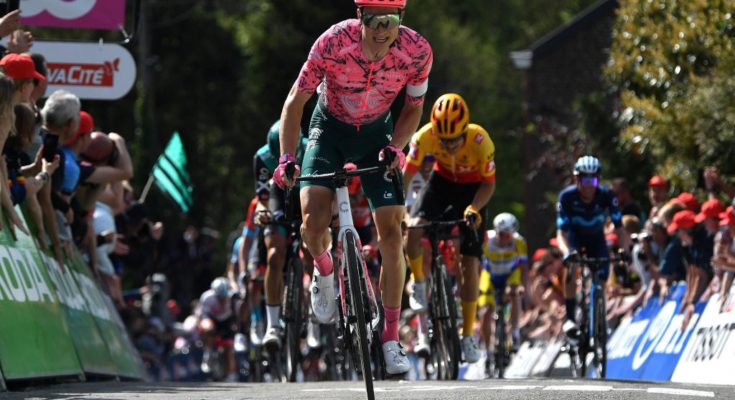 A monument victory, a Tour de France yellow jersey, and a step onto the final podium of a WorldTour stage race.

They’re all things Neilson Powless narrowly missed this year in what was a career-best season characterized by steady progress and close calls.

Now in his fifth season in the WorldTour, EF Education-EasyPost’s Californian star finished eighth at Liège-Bastogne-Liège, fourth overall at the Tour de Suisse, and was twice fourth in stages at the Tour.

If Powless had finished 13 seconds faster on stage 5 of the “big loop” he’d have been the next US rider to wear yellow. Victory at the season-ending Japan Cup gave the 26-year-old his second pro win in a year that could have brought a half-dozen more.

We caught up with Powless while he soaked in the start of his off-season at his European base in Nice. Read on for blinged-out burgers, TV recommendations, and bike racing:

VeloNews: Neilson, congratulations on a standout season. What’s your take on 2022 now you’ve had a chance to soak it all in?

Neilson Powerless: Looking back, I feel like I was a lot more consistent this year, which was really nice. Every year comes with its fair share of ups and downs, like illnesses and what not. But I’m really pleased to have the consistency that I had given the illnesses that were running through the peloton, and that constant fear of COVID.

The Tour de France in particular was a lot of really close calls. Not only with a stage win, but also with the yellow jersey. It was really close a couple times and I was pretty disappointed that I had some golden opportunities there and just I wasn’t able to seal the deal in the end. But it was really nice to be there and it gave me confidence that I could put myself in that position again.

And I think it was still a really nice result to come away with 12th overall. That’s something that I’ll be able to keep with me for a long time – being the 12th-best rider in the Tour de France, it’s a pretty awesome feeling. It’s not like the most flashy result, but it feels good to look back on.

To be honest, I was getting a little bit worried towards the end of the year that I hadn’t won a race yet. I was pretty consistent all year, and had a really great result in the Tour de Suisse, a top-10 in Liège, and had a great Tour de France, but I felt like I missed out on winning a race so narrowly quite a few times.

So finishing in Japan and being able to win there was a huge relief and a sense of accomplishment that I had been longing for all season.

VN: So much consistency at such big races must give you good vibes for the future though?

PN: The wins could have come just with a bit more luck or just some minor differences, not necessarily with fitness, but with tactics.

I only won once, but I definitely had the fitness to win multiple races this year, like in the Tour de Suisse I was really close to a stage. Over the years I have figured out how to slip into breakaways, and the ones that are going to make it to the finish. I feel like in the Tour de France I kind of showed that again, that I can get myself into those positions, and just getting there is half the battle. And then the second half is just having the legs to finish it off.

Getting myself to save a lot more energy helped me be more consistent through stage races I think.

If I’m racing for GC then it takes a lot of self-control to hold yourself back until the last possible moment, and I think that’s ultimately what will help me fight for the win in more races in future. I’m training myself to have restraint and to have that self-control to not touch the wind or not move up or use energy unnecessarily.

VN: Your two pro victories (Clásica San Sebastián and Japan Cup) are both from one-day races, but you also finished fourth overall in Switzerland and 12th at the Tour this year. How do you feel about maybe racing more for GC in future?

PN: It would be nice to keep chasing after GC in one-week races next year. But, for grand tours, I think that’s probably going to have to wait a little bit longer.

I don’t think I’m going to be going into the Tour or any grand tour with the ambition of winning it, at least just yet. I think being able to just win a WorldTour week-long race is the first step in that. So until I do that, I think it’s too early to make a call of like, ‘yeah, I want to go for GC and a grand tour.’

Right now, I just want to stick to what I know that I’m good at, which is one-day races and, and one-week stage races.

VN: Now you’re into the off-season, you can indulge a little. Do you have a particular ‘treat meal’ you tuck into after a grand tour or during a break from the bike?

PN: Either a burger or pizza. Maybe a bacon cheeseburger with egg and avocado, and maybe some BBQ sauce in there. I add everything I can get to make it as delectable as I can!

VN: Do you have any off-bike hobbies you particularly enjoy, either during the season or in the winter?

PN: I swim a bit, like I went to the pool yesterday with my wife. And in the summer, we spend a lot of time at the beach. We live in Nice, so it’s nice just going on picnics and hanging out there.

We like to travel and go see places, too. We just went to Tokyo, that was pretty cool. We spent a week there after Japan Cup, that was a pretty unique experience. I was really happy to finally get to spend a little bit of time there.

VN: And what’s the last thing you watched or read?

PN: I’m watching “Shantaram” right now. It’s pretty good. I read the book around six years ago and they just put it on Apple TV. It’s one of the few TV show-movies that feels like it’s doing the book justice.