The Bowdoin community watched Will Goddard ’25 place sixth in the cross country NCAA Division III East Regional race, last week at Pickard Field. Goddard’s impressive performance in the men’s 8k qualified him for the NCAA Championship, which will be held tomorrow in Lansing, Mich.

Goddard said the East Regional race was his favorite meet of the season. After a rainy morning, the sun broke through the clouds just as the race started, and Goddard felt energized by the muddy trails.

“I was just surprised how good I was feeling through the first three miles,” Goddard said. “I had been kind of connected to the pack the whole time and then just started moving up. Halfway through the race, I started to … overtake some people.”

Goddard recalled that the crowd was particularly enthusiastic despite the weather.

“The cheering was unlike anything I’ve ever seen; it was just so electric,” Goddard said. “The noise was great. It was like long tunnels, basically people screaming.”

Before he was running collegiate races, Goddard grew up in rural California, where he viewed running as a mode of transportation.

“I started running when I was young. I didn’t run competitively until high school. I would run everywhere as a kid just to get places because I lived in a rural area,” Goddard said.

His competitive drive for running, however, started with his elementary school’s yearly 30-minute race, which he recalls stressing about a month beforehand. As he kept getting faster, he started thinking about running collegiately his sophomore year of high school.

Due to a series of injuries and Covid-19 restrictions, this year marks Goddard’s first official cross country season at Bowdoin. At the start of last season, Goddard broke his foot and was forced to take a break from running. He spent most of his time on the elliptical machine in Peter Buck Fitness Center.

“Right before indoor track started last year, my foot had healed, but then I got into running too fast, so I got Achilles tendinitis for most of the season,” Goddard said. “It feels so good now to have a fully healthy season of racing.”

Despite the injury, Goddard has continued to see personal progress this season.

“Every race, I’ve been improving. This past race was definitely the culmination of that,” Goddard said.

Yesterday, Goddard and the other runners who qualified for nationals flew to Lansing for the race. Goddard hopes that Saturday’s race will be an opportunity to run a race he is truly proud of.

“[Nationals is] the end of the line. It’s as far as you can go,” Goddard said. “I just want to run a race where I’m satisfied, especially with my effort. I don’t want to finish and think that I could have run harder and made myself hurt more.”

Goddard is also looking forward to seeing his twin brother, who runs at Middlebury College, at nationals. Goddard views the friendly competition between them as constant motivation.

“I’ve gotten to face him twice this season, and I’ve won one race and he won one race, so we have to settle the score [at] nationals now,” Goddard said. “Having somebody who’s my age and looks like me, there’s definitely a drive to try to be better or at least be equal, so I think that has kind of pushed us both to … run faster or work harder in school.”

Pushing each other to get better has always been at the core of the brothers’ relationship.

“My school didn’t have tracks, so … it was just me and my twin brother basically facing off on random courses. We would just choose a distance to run, and we would basically race each other,” Goddard said.

A friendly sibling rivalry is not the only aspect of cross country that has made Goddard successful. The community and the team aspect of the sport are central to his passion.

“It’s awesome to line up on the start line with all of your teammates … we’ve all worked together,” Goddard said. “Everybody lining up together feels like you’re going into a large battle.”

Goddard and three of his teammates, Leila Trummel ’23, Stephanie Chun ’24 and Brooks Peters ’23, will enter that battle together tomorrow morning in Lansing. 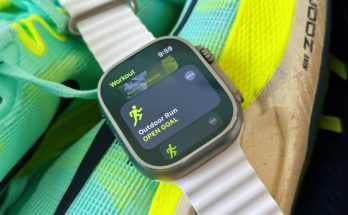 Apple Watch Helped Me Run 3,000 Miles in Less Than 3 Years